APOCALYPSE BABY is a teleshopping show that uses the fear of the climate crisis as a reason to instrumentalize the audience to consume more. A satire on consumption and the climate crisis, on global warming and individuality, on hedonism and bad conscience, on the contradictions within and all around us. A reflection about the way we look away and an exposure of the cynicism of a capitalistic system.

original title
APOCALYPSE BABY, We Advertise The End Of The World 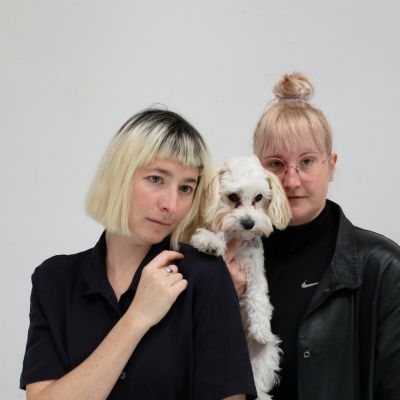 Franziska Unger and Camille Tricaud are a german-french director's Duo. They have worked together since 2018. They are together holders of the Media Arts Scholarship of the Kirch Stiftung for the year 2020 and "Apocalypse Airlines", their first film as a director's duo, won the Short Tiger Award (Next Generation) at the Festival de Cannes 2020 and Apocalypse Baby, We Advertise The End Of The World, their second film, was finalist of the Student Academy Awards (Oscars) 2021. Camille Tricaud was born in Bordeaux (France) and studied Philosophy in Bordeaux and Munich. Since 2014, she has been studying Directing at the University of Television and Film (HFF) Munich. Her short hybrid and experimental films have been selected in numerous international festivals, including Cannes Film Festival, Student Academy Awards (Oscars), Ji.hlava, Côté Court... She also works as a DOP ("Which way to the west", 3sat Award Oberhausen Kurzfilmtage 2019) and as an editor ("The Ink Doesn't Dry", German Short Film Prize Nomination 2019). Franziska Unger was born in Heilbronn and studied Architecture in Dresden. Apart from her activities as an architect, she works as a visual artist with the pseudonym "tanpopo". Her works consist of music videos with found footage as much as experimental film projects and graphic design and have been shown in numerous festivals and galleries including Cannes (Next Generation Short Tiger), Videodox, Münzenberg Forum Berlin... and won several awards. *tanpopo.co*
You have voted!
Stäng
Vote for:
stars
Vote
You have not rated!